In 2015-2016, Google discontinued the support and operation of the Google Earth Browser Plugin. This was the core technology that allowed NUKEMAP3D to function.

As of this writing (2019), there are no viable replacements for the Google Earth Browser Plugin currently available (that is, there are no in-browser, publicly-accessible APIs that duplicate whole-Earth coverage of buildings and allow developers to import their own model files dynamically). If a viable replacement becomes available, NUKEMAP3D will return.

NUKEMAP3D was a mashup between the NUKEMAP and the Google Earth Browser Plugin, created by Alex Wellerstein in 2013. It allowed a user to see the ground effects of a nuclear weapon over any city in the world in 3D, as well as render a size-accurate mushroom cloud for any given yield of nuclear weapon. The goal was to help give a human understanding of nuclear weapons detonations: everyone has seen photographs of nuclear mushroom clouds, but few people have any sense of how large they actually are. Even a "small" nuclear weapon (by modern standards), like those used over the cities of Hiroshima and Nagasaki, is many times larger than anything human beings have ever built. By engaging the third dimension, something more intuitive triggers in the brain, even more so than the 2D representations possible in the original NUKEMAP.

Some screenshots from NUKEMAP3D have been preserved (click to see full-sized):

For more information about the creation of the code, see the NUKEMAP FAQ.

What alternatives to NUKEMAP3D exist?

At the moment, the only easy alternative is to use the NUKEMAP's experimental KMZ output option. To use it, set up any detonation(s) you want to view in 3D in NUKEMAP, and then, click on "Advanced Options": 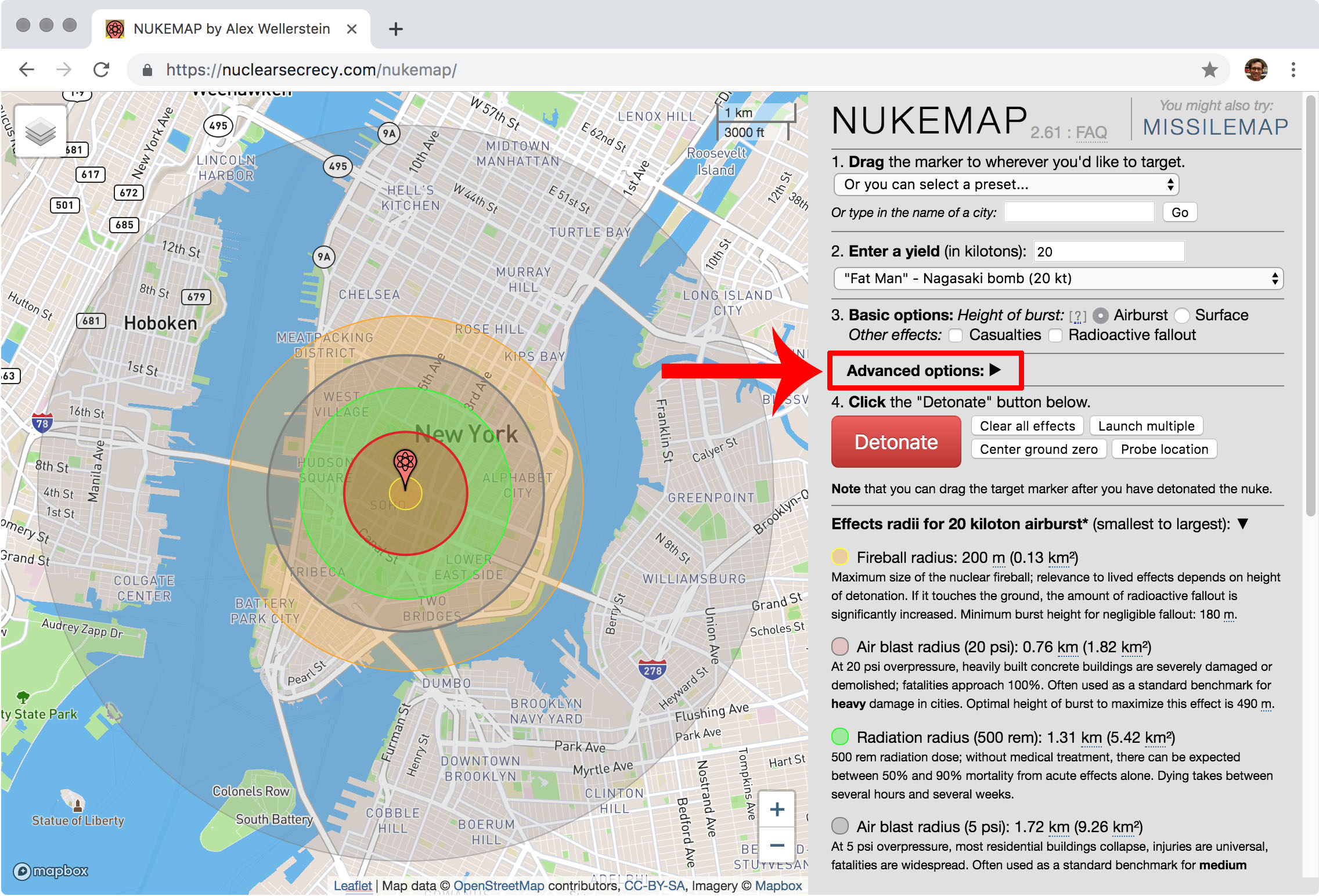 Scroll down to the end of the "Advanced Options" and you'll find a link that says "Export to KMZ":

Clicking that opens up the "Export to KMZ" options. There are a lot of options but you probably just want to leave the default ones and click "Download File." But you're welcome to experiment with the other options if it doesn't look the way you'd like it to, or you want it to show fallout or the fireball.

Once you've download the KMZ file (named nukemap.kmz by default), you can then open it in the free Google Earth Pro desktop application: 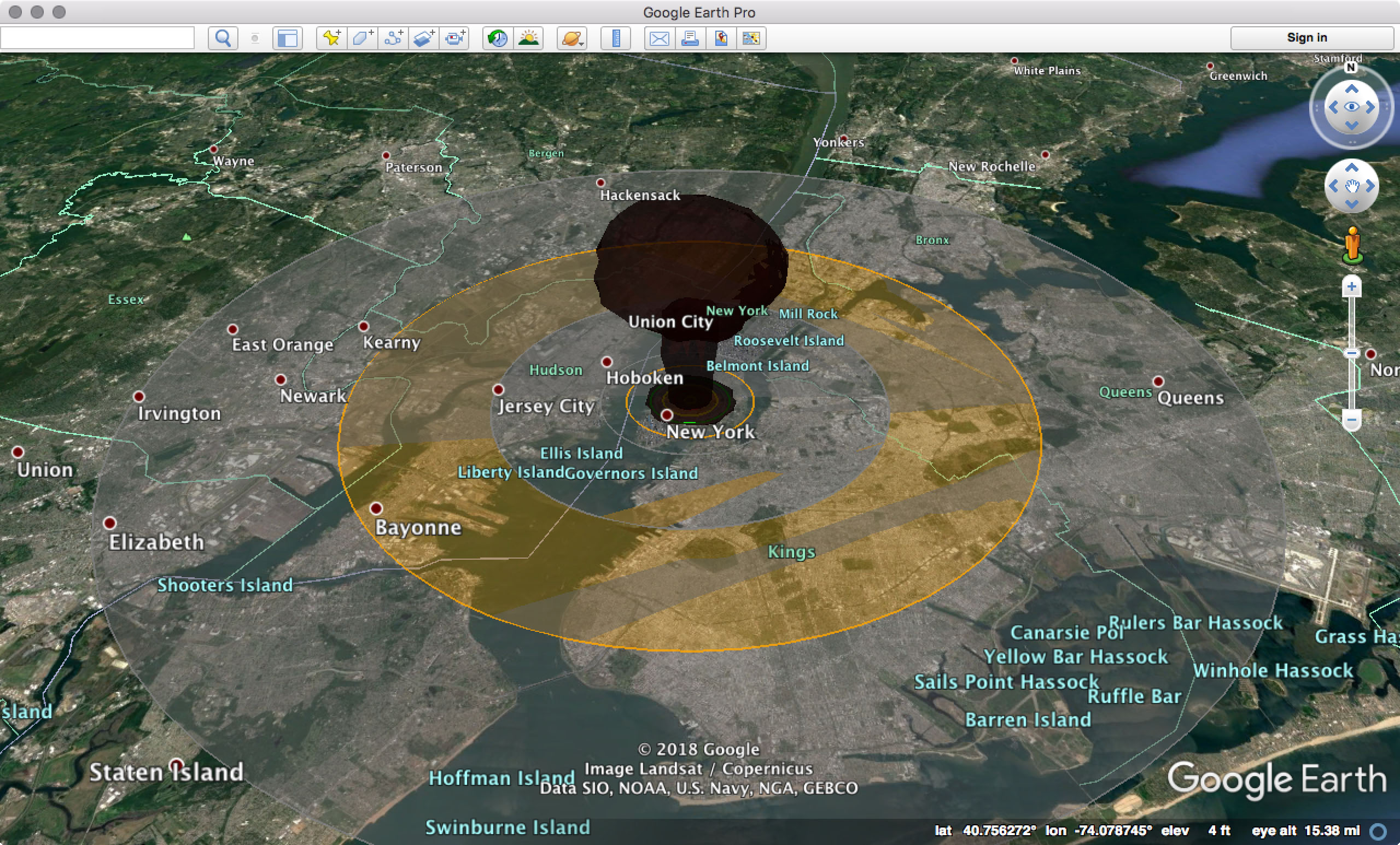 As noted, this functionality is still experimental. It does not always reliably export fallout plumes, for example. And the Google Earth desktop application does not render buildings at the same distance as the plugin did, so it doesn't quite give the same effect. Note that once it is in Google Earth Pro, you can toggle off the various components of the model as "layers" in the sidebar.

What is the future of the NUKEMAP3D code?

If a viable replacement for the Google Earth Browser Plugin becomes available, I will port the code over to it. Google Map's WebGL codebase seems to support 3D buildings like the Google Earth Browser Plugin once did, but they have not opened the API up to developers. It is not clear they will (Google's profit motivation largely has led to it kill such initiatives from what I can tell).

A NUKEMAP-VR project is currently under development at the Stevens Institute of Technology using the effects codes of NUKEMAP3D. It may be able to provide an interesting alternative to the browser plugin, though a VR application will (for the time being) be much more limited in terms of who can access it, and its ability to render cities. (Google has been developing a Google Earth VR API, but they have denied my application to develop on it, because they are interested primarily in video game developers at this point. Sigh.)

If you're a software developer with other ideas or connections with companies who could facilitate further work on this, please feel free to get in touch with me. The closest thing out there to the Google Earth Browser Plugin is Cesium, but it doesn't yet have global building support and so can't really be used to give a sense of mushroom cloud scale.

This page was last updated in June 2019 by Alex Wellerstein.